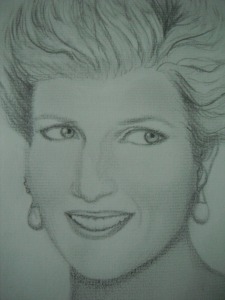 Actually, I did not know ye at all; not personally, anyway.

And Diana, though your death deeply affected me at the time, I had never been, and still am not, a royal-watcher.

But your death on August 31, 1997 was tragic, and it moved me to the point where I felt compelled to draw your face.  (I used to draw a lot as a younger person, especially facial portraits.  I still occasionally will pick up a pencil to draw something, or someone these days, when inspired.)

I actually drew two pictures of Diana after she died.  The first one just wasn’t good enough:

o, I tried again, and was much more satisfied with the results of the second drawing.  (It’s framed now and hangs in my upstairs hallway.  A portion of the pic appears at the beginning of this post.)

At one point, while drawing the second picture, I had a strange sensation that something outside of me was moving my hand.  It was a brief and fleeting moment, and it may have had something to do with exhaustion (it happened in the middle of the night).  But, it was pri-tay, pri-tay, trip-pay, indeed.

And so on this July 1st, of 2011, I dedicate this blog post to the memory of  Princess Diana of Wales.  Though I did not know her personally, I believe the world lost a really nice person when she died.  And today, she would have turned 50.

As I said, I’m not much of a royal watcher, except if it’s something very interesting.  So I must admit I was semi-amused when I heard of something that occurred yesterday, which we might name “The Almost-Runaway Bride of Monaco” incident.  Prince Albert of Monaco (who remained a bachelor this long, for obvious reasons) was supposed to marry former Olympic swimmer Charlene Wittstock this coming weekend.  However, it appears the bride-to-be tried to make a run for it at the Monaco airport yesterday; she had purchased a one-way ticket to South Africa.  Speculation is that some big Albert-related bombshell was about to come out, and she could just not deal….for God’s sake, he’s already got two love children that I know of.  How much worse can it get?

Monaco Palace officials somehow got wind of Charlene’s “flight risk”, and nabbed her at the airport before she could leave.  I’m not sure if she’s chained up right now in some turret in the castle (I hope not), or if she’s being sweet-talked in the Throne Room.  But….you’d think that as a competitive swimmer, she would have already become used to having cold feet.  And…..how brilliant of Prince Albert to pick someone whose athletic event was not running.  (Now, if she had tried to escape by sea……)

Either way, I wish them well.  Or as my mother would say, “Lotsa Luck!”