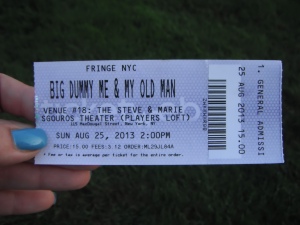 Driving home this past Sunday after seeing a performance of the 2013 NYC Fringe Festival one-woman play Mary Dimino wrote and brilliantly acted, “BIG DUMMY – me & my old man”, I found tears streaming down my face.  It had suddenly occurred to me that what Mary does, and does so well, is what theater is supposed to do, according to the ancient Greeks.

(I remember just enough facts from high school to be dangerous.)

The ancient Greeks recognized that the masses suffered, emotionally – they became bottled up in different ways, and needed a release.  Watching plays – tragedies and comedies – (the sitcom format had not yet been invented) – was a way for folks to absorb some culture while dispelling toxic feelings.  Experiencing the extremes of emotion in a group, laughing and crying, became known as Aristotelian Catharsis, which I think of every time I see that episode of Everybody Loves Raymond where Debra puts on sad music and sits down to have a good cry.

Mary Dimino does this for us.

By inhabiting many colorful characters from her past with a skill and credulity that astounds, Mary examines her relationship with her father from many angles.  It’s like looking at a multifaceted stone that sparkles and confuses.  The way you regard it might change over time, like when you look at toys or furniture from your childhood and are shocked at how small they seem.

Mary’s story was artfully balanced, and always riveting.  The immaculate writing fell upon the auditory center of my brain like perfect snowflakes.

But the acting!  And the story.  Back to the story.  A little girl from Ozone Park, Queens, looking up to her handsome father with the huge shock of chocolate hair.  Chocolate because he made candy sprinkles in a factory called Gumbert’s.  Her dad loved his job and was a simple man by many accounts.  We feel Mary’s admiration for the father who was big and strong, and who some compared (appearance-wise) to Elvis Presley.  I still have a vivid image of Mary and her dad, picking out greeting cards together.  She would always be the one to read them aloud to her stuttering father’s delight.  It was a huge deal to buy one of the big cards from the top shelf, but always worth it.

The journey then continues into Mary’s “tweener”, teen and college years, when she becomes aware of her dad’s shortcomings, and has to deal with her own feelings toward the situation.  Along the way we hear colorful commentary from family members and others, and we learn of the many ways Mary educated herself about academics, family, and life in general.  The big answers to life’s complicated questions just might be simpler than you think, and they may come from places you never expected.  Mary tells us how her father experienced a health miracle possibly because of – precisely because of – his “simple” outlook on life.

The tightly written script was brilliantly acted out by Mary in this final performance of the show’s run.  The beautiful direction by Christine Miller wove lighting and choreography perfectly in with Mary Dimino’s words.

We came for the words, but we got the comedy, and the tragedy, and I can’t think of anyone else I’d rather sit in the dark and watch so I can experience Aristotelian Catharsis, than Mary Dimino.  She’s TOP SHELF. 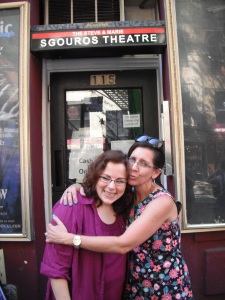