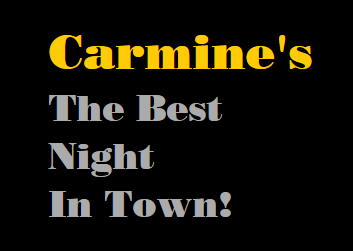 My friend’s dad, who came from war-torn Estonia, would sometimes say, “I love a good revolution!” He often said this right before downing a shot of vodka.

I can’t handle vodka, but I can handle the truth. I’m not impressed with the way comedy clubs and shows are run in my general area. The market is saturated. There are too many comics and not enough audience members, who justifiably balk at steep ticket prices for questionable talent. Where should you spend your comedy dollar? In a cramped club, where it’s too dark to see the food you didn’t want to witness anyway, and where the staff treats you like cattle? Plus, you had to buy a ticket for this great experience, along with (likely) a two-drink minimum! 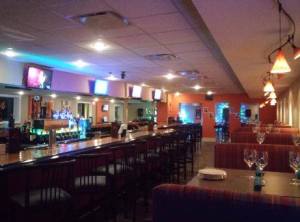 The beautiful bar area of Carmine’s

Carmine’s offers monthly professional comedy showcases for NO COVER CHARGE. Carmine’s philosophy is to charge no cover, but still PAY the entertainers. Once you experience this beautiful, spacious restaurant, with foodie-grade cuisine and friendly staff, you’ll want to return. You will enjoy the same caliber of comedian at Carmine’s professional comedy showcases that you would at any comedy club or showcase in CT, but you will not have to pay for a ticket! In addition, there are no drink minimums! (As if my Estonian friend’s father would have cared! Cheers!)

The next FREE showcase has been scheduled for Saturday, January 16, 2016 (8pm) at Comedy@Carmine’s. Mark your calendar. Don’t miss the next great show in the comedy revolution!

Headliner Dan Frigolette (http://www.danfrigolette.com/) has been on Boardwalk Empire, The Wendy Williams Show and The Artie Lange Show, and is a regular in NYC’s top comedy venues. Feature comic Rick Carino is a regional favorite, hosting/producing showcases and regularly appearing in area clubs.

And of course, don’t forget FREE COMEDY ON FIRST TUESDAYS at Carmine’s. There’s always a fresh and fun batch of upcoming and professional comedians! Next show is 1/5/16. Join the Revolution.